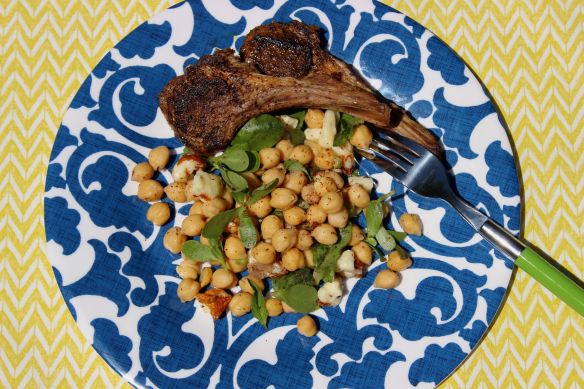 This recipe features a few ingredients with which most people are not terribly familiar. But rest assured, they are all pretty accessible and they each add something unique to the mix. First off, there is purslane, a green that I hadn’t come across myself until a few years ago when I started seeing it in my CSA pick ups. It’s a peppery, lemony, crisp addition to any summer salad. And it just happens to be a weed! I found this great article on purslane in the Chicago tribune. That’s where I learned that purslane is packed with Omega-3’s, making it a real nutritional powerhouse that gives you one more delicious way to “green-up” your diet.

Also on the little known list is sumac. Every time I mention this spice people assume I’m talking about poison sumac. The truth of the matter is that ground sumac is a zingy, lemon-flavored spice used most often in Middle Eastern cooking. It’s beautiful in salads, on dips, and on meat and fish. I get mine at the fine food market at Grand Central terminal in New York City but you can also order it online or purchase it from Middle Eastern food stores.

Lastly, there’s haloumi. It’s most closely associated with Cyprus but versions of it can be found around the Mediterranean. It’s a semi-hard cheese that is brined and usually made from goat or sheep’s milk. Be aware that it’s quite salty. Best to salt your salad after adding the haloumi. I pan-fry it very quickly before adding it to the salad. That way the cheese develops a lovely light brown crust that provides a crunchy contrast to the creamy middle.

This entry was posted in main, salad and tagged chickpeas, lamb, purslane, sumac. Bookmark the permalink.

2 Responses to Chickpea and Purslane Salad with Sumac-Scented Lamb