When Life Gives You Apples…

Posted on October 1, 2015 by nancyduranduran 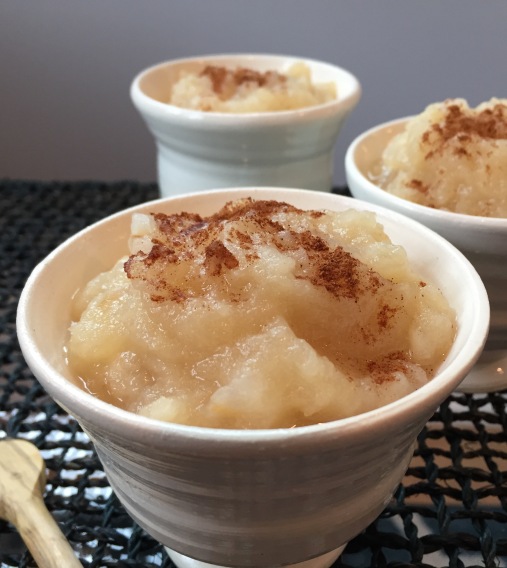 Apples baked with cinnamon and star anise: smells almost as good as it tastes. photo by: Nancy Duran and beautiful handmade bowls by: Joe Darling

I love cookbooks. I guess that must come as no surprise but I think it warrants stating. Even though I rarely “cook from a book,” I love to while away the hours flipping through their pages. So when I recently bought a new bookcase for my kitchen, it was such a treat to rediscover the collection that had been buried in boxes in my basement. One of the greats that I dug out of those boxes was The Zuni Cafe Cookbook. While I’ve never eaten at this San Francisco institution, the recipes in this book are true classics that have inspired me for years. This recipe for baked applesauce is one such inspiration.

Because this applesauce is only slightly sweet, depending on the sweetness of the apples themselves and just two tablespoons of sugar added in, it can be utilized in so many different ways. It can be served hot next to pork chops, warm on top of oatmeal, cold with Greek yogurt and granola, or at room temperature as a snack all by itself. It’s versatile, delicious, and made from natural ingredients, everything a classic recipe ought to be.

2 Responses to When Life Gives You Apples…